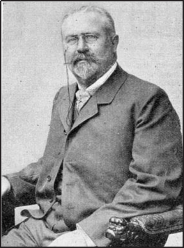 19.8.1849 Johannisburg/PL - 11.11.1910 Düsseldorf/D
\
Max Görz was born in today's Pisz in Poland, then a city in Eastern Prussia. After participation in the Franco-Prussian War, he graduated from the Berlin Polytechnic School, was appointed Regierungs-Baumeister in 1878 and stationed at River Vistula. At that time the river had hardly undergone any engineering works and thus ran free across the landscape. Following large floods, Görz in 1886 erected the sluice of Plehnendorf. Also he improved the Nogat River close to the city of Jonasdorf in 1888. Following these successful designs, Görz was decorated with the Red-Eagle Order. The next six years were spent as a chief engineer at the Kaiser Wilhelm Canal, where he collaborated also with Otto Baensch (1825-1898). Once the Canal was inaugurated in 1895, Görz was posted in the city of Danzig, today's Gdańsk in Poland, as Strombaudirektor of Vistula River until 1901. He thus returned to his origins and added considerably to the large East European river in terms of flood protection and river rehabilitation.
\
Görz directed from 1901 the department of roads and foundations in the Rhineland province. There, he was mainly involved in road designs and also participated in the congresses of road construction in 1908 and in 1910. Görz has published some papers relating to his works on the Vistula River, namely on the loss of the sluice gate in Plehnendorf, and the icebreaker works on the river known for its dangerous floods due to deposition of large ice masses that break in the spring season. Görz and one of his colleagues are known for a book on removal of river ice that includes an overview on all German rivers. This topic was relevant in the 19th and the early 20th centuries when the rivers of Central Europe threatened population with large masses of ice, a topic that is actually important for countries located in North Europe, among other cold regions.
\
Görz, M. (1888). Die Zerstörung der Plehnendorfer Schleuse durch das Hochwasser vom 1.4.
1886 und die Wiederherstellung der Schleuse. Zeitschrift für Bauwesen 38: 267-281.
Görz, M. (1888). Die Eisbrecherarbeiten im Weichselstrome. Zeitschrift für Bauwesen
38: 352-375.
Görz, M., Buchheister, M. (1900). Das Eisbrechwesen im Deutschen Reich. Auf Veranlassung des Königlichen Preussischen Herrn Ministers der öffentlichen Arbeiten. Asher: Berlin.
Niese, A. (1910). Max Görz. Zentralblatt der Bauverwaltung 30(95): 621. P