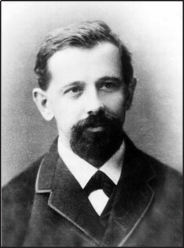 22.8.1847 Nesselwang/D - 30.6.1895 Kempten/D
\
Albert Ott made studies as a mechanical engineer at the Munich Polytechnic School and continued there at the mechanical workshop of Ertel & Sohn. He moved then to Siemens & Halske in Berlin, joined similar enterprises in Milan and London before returning to the Allgäu County of Bavaria in 1873 to found his mechanical workshop in Kempten. His first designs were instruments for geodesy; he then became a maker of flow meters using the principle of Reinhard Woltman (1757-1837). In contrast to Pitot tubes, the Woltman meter has a turbine-like wheel rotating in a fluid current. Ott added essential components to the original design which had hardly worked in practical situations: He protected the spinning wheel with a casing and added a counting mechanism connected to an electrical clock indicating signals after a certain number of wheel revolutions. Ott furnished accurate gauges for water surface elevation measurements. He had the first successes with his hydraulic instrumentation at the 1880 World Exhibition in Melbourne. Many of his designs were thus used all over the world, given their accurate finish, their robustness and their simplicity in practical usage. After his death, the Ott firm was taken over by his two sons Hermann and Ludwig, and the fabrication of modern instrumentation for hydraulic measurements continues today.
\
The last decades of the 19th century collapsed with the time when large discharge measurement campaigns were undertaken, to estimate the hydraulic potential of European rivers. In most of its countries, the annual discharge distribution was of concern, right at the time when Ott, among others, presented suitable instrumentation for discharge determination. Ott's instruments were particularly reliable in applications because of their excellent reputation and performance.
\
Brand, F.L. (1992). Wassermessung mit dem Woltmanflügel. Technikgeschichte 59(2): 133-155. Franke, P.-G., Kleinschroth, A. (1991). Albert Ott. Kurzbiographien Hydraulik und Wasserbau: 254-255. Lipp: München. P
Lanser, O. (1953). Zur Geschichte des hydrometrischen Messwesens. Blätter für Technikgeschichte
15: 25-57.
Ott, A. (1883). Beschreibung und Gebrauchsanweisung der hydrometrischen Flügel mit electrischer Übertragung der Umdrehungen nach Prof. A.R. Harlacher in Prag. Kempten.
Ott, A. (1883). Hydrometrischer Universalflügel. Zeitschrift für Instrumentenkunde 10(2): 60-63. Schiller, H. (1983). Die Entwicklung des gewässerkundlichen Messwesens in Bayern. Informationsbericht 3: 53-80. Bayerisches Landesamt für Wasserwirtschaft: München.