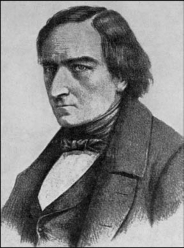 29.6.1793 Chrudim/CR - 9.10.1857 Ljubljana/SI
\
Josef Ludvik Frantisek Ressel was born in Bohemia between Prague and Brno, then possessions of Austria. He was educated at the Forestry Academy of Marienbrunn in the vicinity of Vienna from 1814 to 1816. In 1817 he moved as a forest guard to Pleterje in Slovenia and three years later was appointed vice-inspector for the region of Ljubljana. While staying later in Trieste at the Adriatic Sea, he invented torrent navigation, a steam hydraulic machine and a steam vehicle. He was appointed forest inspector of Motovun in today's Croatia. He passed away during an inspection to Ljubljana because of a malaria infection.
\
Ressel's most important invention was the naval screw, which he probed first in 1829 while experimenting with the steam boat Civetta in the harbor of Trieste. Although this idea was old and tested previously, Ressel succeeded in the introduction of an alternative to sail and paddle propulsion that has survived until today. In 1827 already, Ressel had asked two colleagues to use a screw of half a meter of diameter, and the two noted a much larger speed as compared to rowing the same boat. Ressel's particular contribution to naval propulsion was the design of the screw at the after body of a ship. Shortly after his death, screw propellers were introduced in England, then the leading naval power, yet without reference to Ressel. Ressel also published various papers on navigation, such as his 1841 work on the navigation on sea currents, on methods to utilize water power for energy production in 1846, on the "iron ship" later developed by Isembard Kingdom Brunel (1806-1859) or the history of the naval screw in 1857.
\
Hess, R. (1885). J. Ressel. Lebensbilder hervorragender Forstmänner: 288-289. Parey: Berlin. Horn, F. (1938). 100 Jahre Schiffsschraube. Zeitschrift für physikalischen Unterricht 51: 137-149.
Keimel, R. (1988). Ressel Josef. Österreichisches Biographisches Lexikon 1815-1950 9: 89-90.
Böhlaus: Graz.
Poggendorff, J.C. (1863). Ressel, Joseph. Biographisch-Literarisches Handwörterbuch 2: 610.
Barth: Leipzig, with bibliography.
Reitlinger, E. (1863). Joseph Ressel der Erfinder des Schrauben-Dampfers: Festschrift zur Enthüllungsfeier des Ressel-Denkmales in Wien am 18. Jänner 1863. Braumüller: Wien.
Ressel, J. (1893). Comité für die Centenarfeier Josef Ressels. Wien. P
Struna, A. (1975). Ressel, Josef. Scienziati e tecnologi 3: 34. Mondadori: Milano. P Wess, A. (1957). Josef Ressel. Blätter der Technikgeschichte 19: 1-31. http://www.aeiou.at/aeiou.encyclop.r/r532871.htm P http://www.aeiou.at/aeiou.encyclop.r/r532871.htm P