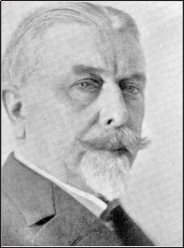 26.2.1873 Oldenburg/D - 29.3.1940 Dresden/D
\
Johann Schütte graduated from Berlin Technical University in 1897 as a naval engineer and entered the Technical Department of Norddeutscher Lloyd. This great German line profited from the model experiment tank in Bremerhaven to improve both the Kaiser's fleet and the mercantile marine. Schütte directed this institution and was appointed in 1902 professor of naval architecture at the University of Danzig. A Zeppelin disaster in 1908 led Schütte to prepare new designs for rigid airships. Near Berlin a total of twenty-two were built from 1911 to 1918, of which details were later adopted by the Zeppelin engineers. In 1919 Schütte became president of the Wissenschaftliche Gesellschaft für Luftfahrt whose activities he vigorously directed for fourteen years. In 1930 he was elected president of Schiffbautechnische Gesellschaft STG of which he was a founding member in 1899. From 1926 Schütte was also the editor of the journal Schiffbau, Schiffahrt und Hafenbau, the main journal of naval architecture until World War II. He was awarded from Technical University of Berlin the Honorary Doctorate in 1916, and the Gold Medal from STG.
\
Schütte was a researcher, a teacher and an organizer. His research was directed towards the optimum shape of naval after bodies, and the influence of bilge keels on resistance and rolling of ships in still water. During his stay in Bremerhaven, Schütte was particularly interested in ship resistance, a topic that he investigated also in aviation. Schütte's airships were characterized by a steering mechanism later adopted by others. In the realm of aeronautics Schütte published his 1926 book.
\
Anonymous (1912). Schütte, Johann, der Vorstand des Deutschen Luftfahrer-Verbandes. Deutsche Luftfahrt-Zeitung 16: 559. P
Anonymous (1933). Geheimer Regierungsrat Prof. Dr.-Ing.E.h. Schütte. The Shipbuilder and the Marine Engine-Builder 40(4): 154. P
Anonymous (1940). Dr.-Ing.E.h. Johann Schütte. Flugsport 32(8): 115. P
Poggendorff, J.C. (1953). Schütte, Johann. Biographisch-Literarisches Handwörterbuch 7a: 290-291. Akademie-Verlag: Berlin, with bibliography.
Schütte, J. (1926). Der Luftschiffbau Schütte-Lanz. Oldenbourg: München. Schütte, J. (1937). Neue Wege und Ziele im Schiffbau. Berlin.
Various (2000). Der Traum vom Fliegen. Johann Schütte - Ein Pionier der Luftschifffahrt.
Isensee: Oldenburg. http://www.bis.uni-oldenburg.de/schuette-lanz/expose/03.jpg