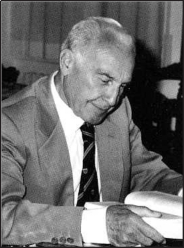 17.4.1925 Rovigo/I - 5.3.2007 Genova/I
\
Enrico Marchi graduated as a civil engineer from the University of Bologna in 1950. He there made his PhD degree and was appointed in the 1950s assistant professor of hydraulics. In 1962, he moved to the Genova University in this position and directed its Institute of Hydraulics until 1998. Marchi was a Member of the Accademia Nazionale dei Lincei, Italy's prestigious Academy; and he presided over the Accademia Ligure di Scienze e Lettere from 1998. He was awarded the Gold Medal of the Ministry for Public Education and was the president of the Italian Association of Theoretical and Applied Mechanics AIMETA.
\
Marchi was one of the outstanding Italian hydraulicians in the second half of the 20th century. His research concerned the shape effect in pressurized conduits in the 1950s. Usually, the pressure loss in pipes is accounted for by the hydraulic radius of the pipe profile. Marchi, among others, detected with careful experiments that the shape has an additional, yet relatively small effect on the head losses. He also contributed in these years to the understanding of flood waves in rivers. In the 1960s, Marchi added to the knowledge of air-water flows which commonly occur in hydraulic engineering for larger flow velocities. Then, in the 1970s, he took interest in open channel phenomena, such as gate flow, nearly critical flows as typically occur close to channel drops, choking flow at bridge piers and methods to counter floods in the Po River basin. Together with Antonello Rubatta (1929-), Marchi published a successful book in 1981, and he also contributed to the Enciclopedia delle Scienze Fisiche, and to the Italian Civil Engineering Manual. During his stay at Genova University, the Institute of Hydraulics became known for its excellence all over Italy.
\
Anonymous (1980). Prof. E. Marchi. 17 Convegno di Idraulica Palermo 1: 296. P
Marchi, E. (1956). Le onde di regime a lungo periodo. L'Energia Elettrica 33(8): 783-791.
Marchi, E. (1960). Sul moto uniforme turbolento delle correnti liquide. Accademia Nazionale dei Lincei Serie 8 29(5/6): 313-320; 29(7/8): 521-531.
Marchi, E. (1961). Il moto uniforme delle correnti liquide nei condotti chiusi e aperti. L'Energia Elettrica 38(4): 289-301; 38(5): 393-413.
Marchi, E. (1965). Moto di correnti miste aria-acqua in tubazioni orizzontali. L'Energia Elettrica 42(1): 1-12.
Marchi, E., Rubatta, A. (1981). Meccanica dei fluidi: Principi e applicazioni idrauliche. UTET: Torino.