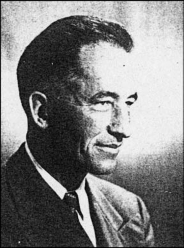 2.11.1897 Stockholm/S - 7.7.1975 Los Angeles/USA
\
Jacob Aall Bonnevie Bjerknes was the nephew of Carl Anton (1825-1903) and the son of Vilhelm (1862-1951). Bjerknes made his studies at the Oslo University and there also gained the PhD title in 1924. Influenced by his father, Bjerknes aimed to apply the principles of hydrodynamics to ocean and atmospheric currents. In 1931, he was appointed professor of meteorology at the Bergen University. During a conference in the USA, he was blocked because of the outbreak of World War II. He accepted the first professorship of meteorology at the University of California, became the American citizenship in 1946 and was awarded the Rossby Medal in 1960 from the American Meteorological Society.
\
Bjerknes' first works related to undulations in the atmospheric fronts from the Atlantic associated with low pressure during his stay in Bergen. These observations led him to investigate cyclones and the prediction of stormy weather periods. He introduced the notions "atmospheric front" and "cold front" referring thereby to advancing cold air mass. He noted a similarity with hydraulic jumps in open channel flow. The mechanism of cyclone development was inserted in weather cards allowing for a better weather forecast. The scientific contribution of Bjerknes was the concept of the non-diverging level in meteorology. This level is approximately located at an elevation above the ground where the air pressure is half of the ground pressure. This concept allowed Carl-Gustaf Rossby (1858-1957) to develop later the scheme for the daily weather forecast. Bjerknes' 1957 monograph gives a summary of his developments in meteorology.
\
Bjerknes, J.A.B. (1919). On the structure of moving cyclones. Geofysike Publikationer 1(2): 1-8.
Bjerknes, J.A.B., Palmén, E. (1937). Investigations of selected European cyclones by means of serial ascents. Norske Videnskaps-Akademi, Geofysike Publikasjoner 12(2): 1-62.
Bjerknes, J.A.B. (1957). Detailed analysis of synoptic weather. Rand Corporation: Santa Monica. Bjerknes, J.A.B. (1974). Bjerknes Jacob Aall Bonnevie. Scienziati e tecnologi 1: 132-133. Mondadori: Milano. P
Eliassen, A. (1995). J.A.B. Bjerknes. Biographical memoirs, National Academy of Sciences 68: 3-21. National Academy Press: Washington DC. P
Friedman, R.M. (1981). Bjerknes, J.A.B. Dictionary of scientific biography 17: 85-88.
Scribner's: New York, with bibliography.
Wurtele, M.G. ed. (1975). Selected papers of Jacob Aall Bonnevie Bjerknes. North-Hollywood. http://www.nap.edu/readingroom/books/biomems/jbjerknes.html P