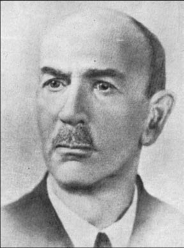 29.9.1874 Lwów/PL - 2.7.1948 Rabka/PL
\
Karol Michał Pomianowski graduated in 1900 from the Technical University of Lwów (Lemberg) and then became a Lecturer in water supply and sewage systems. He designed a reservoir system and edited the four volumes publication Water power in Galicia. He received his PhD title for a research on the maximum discharge of urban catchments in 1913. His Principles of water supply systems was published jointly with Maksymilian Matakiewicz (1875-1940) and a colleague. In 1914 also he was appointed associate professor and head of the Chair of Water Engineering at Lwów University.
\
In 1918 Pomianowski moved to Warsaw to lecture on hydraulic engineering at the Warsaw Technical University. In 1919 he was there appointed full professor at the Chair of Water Engineering. He designed water supply and sewage systems of Polish cities and improved the water power facilities of Poland's rivers. His publications in this field include the Current state of utilization of water power in Poland in 1926, and Roz the Design of a reservoir and a water power plant in nów on the Dunajec River in 1930. In the 1930s he collaborated with M. Rybczyński and Kazimierz Wóycicki (1898-1944) on the monograph Hydrology. Together with H. Herbich and Z. Zmigrodzki he designed a weir on the Vistula River near Warsaw. During the Nazi occupation of Poland, Pomianowski taught at the Higher Technical School of Warsaw. In 1945 he continued at the Technical University at Gdań sk, where he contributed to the set-up of a water laboratory. He was a member of the Academy of Technical Sciences since 1923. The largest Polish hydropower plant at Solina on the San River was named after him.
\
Czapski, M., Mikulski, Z. (2005). Pomianowski Karol Michał. Słownik biograficzny techników polskich 16: 113-115. P
Pomianowski, K. (1913). Beitrag zur Berechnung der Höchstwassermenge aus Stadtgebieten. Zeitschrift für Gewässerkunde 11: 273-291.
Pomianowski, K., Ciechanowski, Z., Matakiewicz, M. (1914). Principles of water supply systems construction. Lwów (in Polish).
Pomianowski, K., Rybczyń ski, M., Wóycicki, K. (1933). Hydrology, Parts I to III. Komisija Wydawnicza Towarzystwa Bratniej Pomocy Studentów Politech: Warsaw (in Polish).
Pomianowski K. (1934). Reservoirs and dams. KWTB: Warsaw (in Polish).
Pomianowski, K. (1946). Hydraulic Laboratory at the Technical University of Gdańsk. Przeglad Techniczny 67(24): 7-9 (in Polish).
Pomianowski K. (1947). Hydrology 4: Hydrostatics. KWTB: Gdańsk (in Polish).