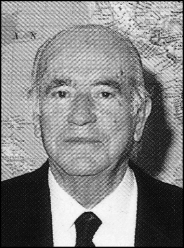 30.8.1922 Madrid/E - 12.10.2003 Lisboa/PT
\
Fernando Maria Manzanares Abecasis, a brother of Alberto Manzanares (1915-2003), was educated as a civil engineer at the Lisbon Instituto Superior Técnico IST and from 1956 was there a professor of hydraulic engineering. From 1948 he headed the Hydraulic Division of the Laboratório Nacional de Engenharia Civil LNEC. Abecasis was a Member of the Committee on waves and seiches action of the Permanent International Association Navigation Congresses PIANC as also of the coastal hydraulics Committee of IAHR, of which he was a frequent participant. In parallel to teaching and research, he was consultant for the Hidrotécnica Portuguesa.
\
Abecasis had a career similar to his brother's, both in research and consulting, such that the two were leading hydraulic engineers of Portugal. Abecasis investigated in 1955 the hydraulics of the morning glory spillway, then a hydraulic structure relatively rarely used for a limited design discharge. From observations in the USA morning-glory spillways have a potential for large underpressure along with flow instability and cavitation damage. From then, only free flow was used for the design discharge such that no dangerous low pressure zones could occur along the entire hydraulic structure, from the intake usually in a reservoir to the outlet upstream from a stilling basin. Abecasis then proposed in 1961 an alternative design for the spillway crest geometry of the standard overflow structure. He observed relatively large underpressures upstream from the crest section and therefore proposed the three radius design for the upstream quadrant. Accordingly, the limit unit discharge on such spillways could be increased.
\
Abecasis, F.M. (1952). A divisão da hidráulica do LNEC. Memória 28. LNEC: Lisboa. Abecasis, F.M. (1955). The behaviour of morning-glory shaft spillways. 6 IAHR Congress La Haye C(8): 1-10.
Abecasis, F.M. (1961). Soleiras descarregadoras. LNEC: Lisboa.
Abecasis, F.M., Oliveira, I.M. (1969). Study of the influence of a dam built in a tidal estuary, on its tidal characteristics. IAHR Congress Kyoto 3(31): 283-291.
Abecasis, F.M. (1977). The behavior of spillway crests under flows higher than the design flow. IAHR Congress Baden-Baden 4: 559-566. Abecasis, F.M. (1980). Don't always put dams in narrowest part of valley. Civil Engineering
50(6): 93-94. P http://www.pianc-aipcn.org/december2003/ http://72.14.221.104/search?q=cache:kcv33Hh6W5EJ:www.pianc-aipcn.org/december2003/ december2003.html+fernando+abecasis+1922-&hl=de≷=ch&ct=clnk&cd=2 P