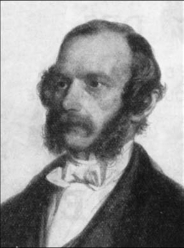 2.1.1811 Bruxelles/B - 29.10.1892 Liège/B
\
Charles de Cuyper made his studies at the University of Bologna, where he obtained also the doctor title. During his stay in Italy, the political climate was such that he wanted to do a career in the army. When returning to the young state of Belgium founded in 1830, he was appointed in 1834 a pioneer of the General Staff. After seven years he had risen to the position of captain. During this time he worked in parallel at Ecole Centrale of Brussels as a mechanics Lecturer. He was appointed in 1838 extraordinary hydraulics professor at University of Gent but moved in 1846 to University of Liège as mechanics professor, where he was promoted to full professor in 1854. De Cuyper served as the rector of Université de Liège from 1867 and retired in 1881. He was a Commander of the Order of Leopold for his works towards his country, Commander of the Order of Saint Stanislas from Russia, and Officer of the Order of the Crown of Italy. He was also a Member of various academic societies.
\
De Cuyper was known for an early hydraulics book which he wrote during his stay in Gent. At Liège University, he taught no more hydraulics and was absorbed mainly with his duties as a rector. He was involved in the Universal Exposition of 1867 and was thus responsible for four volumes that introduced the various sections of public works, of sciences and their applications to industries. He in addition was between 1857 and 1876 editor of the main Belgium engineering journal Revue Universelle des Mines and shared this job with two colleagues until passing away. The journal had normally the sections Mining engineering, Geology, Public works, Mechanics, and Civil engineering, and additional sections with book reviews and short notices. The journal was given up only in the 1970s, following the strong decrease of the Belgian mining activities.
\
Anonymous (1892). Charles de Cuyper. Revue Universelle des Mines Série 2 19(3): I–VI. Anonymous (1913). Charles de Cuyper. Liber memorialis Université de Gand 2: 92-93. Vanderpoorten: Gand.
Anonymous (1957). Charles de Cuyper. Revue Universelle des Mines 100: 446. P
Cuyper, C. de (1839). Cours d'hydraulique. Université: Gand.
Cuyper, C. de (1852). Note sur le régime des fleuves et des rivières et sur les moyens employés pour prévenir les inondations. Liège.
Cuyper, C. de (1878). L'enseignement technique en Italie. Revue Universelle des Mines Série 2 3: 253-350; 3: 580-637.