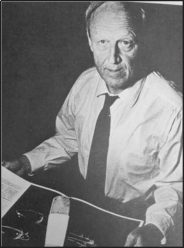 3.5.1908 Norrköping/S - 2.4.1995 Djursholm/S
\
Hannes Alfvén presented his doctoral thesis at the age of 26 after University studies in Uppsala. He was appointed professor of electromagnetic theory at the Stockholm Royal Institute of Technology at the age of 32. Alfvén accepted a professorship in 1967 at the University of California, San Diego, but he spent every year a leave to Sweden, until formal retirement in 1973. In 1970, Alfvén was awarded the Nobel Prize for physics for his contributions and fundamental discoveries in magneto-hydrodynamics and their fruitful applications in plasma physics.
\
Alfvén was an outstanding pioneer in plasma physics and astrophysics. His scientific work reveals a profound physical insight that allowed him to extract results of importance. He also got a fresh perspective by approaching astrophysical problems from an electromagnetic point of view. Alfvén's best known discovery, the Alfvén waves, is in many ways typical of his approach. It grew out of sunspots and the sunspot cycle, but the waves he discovered have proven to be of fundamental importance in plasma physics. In the 1930s, electromagnetic theory and fluid dynamics were well established, but separate. Alfvén realized that the magnetic fields observed in sunspots must derive from electrical currents in the plasma itself, and that these fields and currents must give rise to forces that affect fluid motion, which in turn induces electric fields. Although this concept was published in 1942, the breakthrough came in 1948 during a seminar that convinced Enrico Fermi of the new kind of waves. Alfvén contributed to the progress of science not only by his own work but also by the extraordinary inspiration that he gave to his many students as well as to colleagues all over the world.
\
Alfvén, H., Fälthammar, C.-G. (1963). Cosmical electrodynamics. Clarendon Press: Oxford.
Alfvén, H. (1978). Problems of physics and the evolution to the universe. Armenian Academy of Sciences: Yerevan.
Alfvén, H. (1981). Cosmic plasma. Reidel: Dordrecht.
Anonymous (1975). Alfvén, Hannes Olof. Scienziati e tecnologi 1: 22-24. P
Fälthammar, C.-G. (1995). Hannes Alfvén. Physics today 48(9): 118-119. P
Newton, D.E. (1995). Hannes Olof Gösta Alfvén. Notable twentieth-century scientists 1: 24-26.
Pease, R.S., Lindqvist, S. (1998). Hannes Olof Gösta Alfvén. Biographical Memoirs of Fellows of the Royal Society 44: 1-19, with bibliography. P
Rudberg, E. (1950). Årets polhemsbelöningar. Teknisk Tidskrift 80: 255-256. P