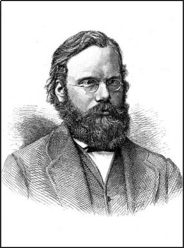 12.4.1849 Zürich/CH - 31.8.1937 Zürich/CH
\
Albert Heim graduated as a geologist from Zurich Polytechnic School, today's ETH, in 1872. He continued his geological education in Berlin and traveled in Scandinavia and Italy. He was appointed professor of geology both at ETH in 1873 and at University of Zurich in 1875. Their institutes of geology were merged in 1899. On his retirement in 1911, Heim's students organized a torch-light procession through Zurich as mark of appreciation. In 1919, the Natural Science Society of Zurich celebrated his 70th birthday with an important Festschrift. Heim was a Member of the Swiss Geological Society from 1888, took over presidency in 1894 and was appointed Honorary Member in 1926 on relinquishing this office.
\
Heim's activities were manifold, and his publications number almost 400. He was not only a prolific writer, easy to read and understand, but an accomplished artist, equally at home, whether drawing forward with a pencil, or backward with a burin. Heim liked to be outside and study nature. Besides his well known researches in geology, he was involved in torrents that destroyed valleys after storms. Further issues were forests torn down by avalanches, large slides in steep mountainous portions as a result of poor drainage, and advices given during the construction of railway tunnels. Heim thus applied his findings to engineering questions by understanding the crust of the Earth. His 1885 book on glaciers was the first in this field with a scientific background. From 1919 to 1922 Heim published two volumes on the Swiss geology, a masterly work in which he put all his knowledge and his feelings for his country. He was elected Member of the Royal Society in 1896, besides a large number of decorations.
\
Anonymous (1908). Dr. Albert Heim. Umschau 12: 801. P
Bailey, E.B. (1939). Albert Heim. Obituary Notices of Fellows of The Royal Society 2: 471-474. P
Collet, L.W. (1938). Albert Heim. Archives des Sciences Physiques et Naturelles Genève, Série 5 20: 9-12.
Heim, A. (1885). Die Quellen. Schwabe: Basel.
Heim, A. (1885). Handbuch der Gletscherkunde. Engelhorn: Stuttgart.
Heim, A. (1892). Zwei Flussverschiebungen im Berner Oberland. Zollinger: Basel. Heim, A. (1896). Zur Entstehung der Alpenseen. St. Petersburg.
Heim, A. (1919). Geologie der Schweiz. Tauchnitz: Leipzig.
Poggendorff, J.C. (1898). Heim, Albert. Biographisch-Literarisches Handwörterbuch 3: 605-606; 4: 606; 5: 513; 6: 1067-1068; 7a: 419. Barth: Leipzig, with bibliography.