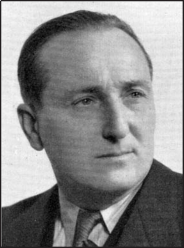 30.12.1892 Paris/F - 12.1.1942 Brig/CH
\
Maurice Landry was born from Swiss parents in Paris. He graduated as a civil engineer from the Swiss Federal Institute of Technology ETH in 1917 and joined in 1918 the construction company Locher & Cie in Zurich, where he stayed until his tragic accident during controlling a drainage tunnel in Wallis Canton. During his last ten years Landry had been in the position of a chief engineer.
\
From 1918, Landry was involved in the hydropower plant of Eglisau on Rhine River. Later, he moved to the Chancey-Pougny hydropower plant on Rhone River, at the Swiss-French border downstream of Geneva. He there collected experiences in his profession, particularly in the foundation technique using pressurized air, which had been developed in the 19th century mainly by Conradin Zschokke (1842-1918). From 1925, Landry acted as the local chief engineer for the hydraulic structures of the Birs River and for a large railway bridge in Solothurn Canton. In the 1930s, Landry was involved in large dam structures, such as the Ryburg-Schwörstadt, the Kembs and the Albbruck-Dogern power plants on Rhine River, which actually form a chain of power production on the largest Central European river. From 1938 to 1941, Landry moved to the Reckingen power plant also located on Rhine River, which was taken into operation shortly before his death. As other European countries, Switzerland intensively expanded its hydropower production during the 1930s to counter unemployment and to advance the national power supply with hydropower. Unlike most of the other countries, however, hydropower in Switzerland remains the main source for the national electricity supply. The country is therefore also known as the European water castle. After Landry had to join the Swiss Army in 1941, he was in charge of control works for a hydropower scheme close to Brig, where an accident put an end to his life.
\
Anonymous (1932). Das Rheinkraftwerk Ryburg-Schwörstadt. Schweizerische Bauzeitung
99(16): 197-202; 99(17): 213-217; 99(19): 239-244; 99(21): 266-270; 99(23): 295-298;
99(24): 307-309; 99(26): 335-.
Lüchinger, A. (1942). Maurice Landry. Schweizerische Bauzeitung 119(11): 130. P
Perrochet, P. (1927). Quelques particularités des ouvrages et installations de l'Usine de Chancy-Pougny. Bulletin Technique de la Suisse Romande (11): ; (12) :
Vischer, D., Sinniger, R., eds. (1998). Hydropower in Switzerland. Society for the Art of Civil Engineering: Zurich.