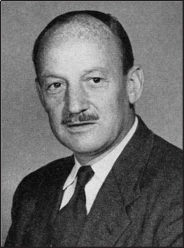 23.7.1904 Brechin/UK - 8.6.1957 Aldeburgh/UK
\
James Foggo Allan was educated at the Dumbarton Academy and at Glasgow University, and he served an apprenticeship with William Denny and Bros., Ltd, the Dumbarton shipbuilders. He held the Sir William White Research Scholarship of Institution of Naval Architects during 1927 to 1929. In 1948 he received the D.Sc. degree of Glasgow University for his pioneering work in developing ship roll stabilizers, now a familiar feature of most passenger ships. From 1926 to 1948, Allan was on the staff of the ship model experiment tank, Dumbarton, finally as its head. In 1948, he was appointed super-intendent of the Ship Division of the National Physical Laboratory NPL. Since then he had considerably widened its range of activities and the new NPL Ship Hydrodynamics Laboratory in Feltham was planned.
\
Allan was an international figure in the world of naval architecture; he served on many committees and published a number of notable papers. He was a Council Member of the Institution of Naval Architects and he took a leading part in the organization of the triennial International Towing Tank Conference such as in Delft in 1933. His papers concerned ship design, including scale effects on propellers and shaft supports, the resistance of barges, hull forms for drifters and the comparison of ship-trial results with model predictions. His paper The stabilization of ships by activated fins was awarded a premium of the Institution of Naval Architects, and The effect of roughness on ship resistance, jointly presented with a colleague to the North-East Coast Institution of Engineers and Shipbuilders in 1945, gained the M.C. James Medal. In addition, Allan was actively engaged in World War II on the development of a high-speed hydrofoil-supported torpedo boat. Allan collapsed and died while sailing on holiday in Suffolk.
\
Allan, J.F. (1934). Scale effects in screw propellers. Trans. Institution Naval Arch. 76: 111-135. Allan, J.F. (1945). The stabilization of ships by activated fins. Trans. Institution of Naval Architects 87: 123-159.
Allan, J.F., Cutland, R.S. (1956). The effect of roughness on ship resistance. North East Coast Institution of Engineers and Shipbuilders 72: 257-278.
Allan, J.F. (1957). National Physical Laboratory: New ship hydrodynamics laboratory. Trans. Naval Architects 99: 326-348.
Anonymous (1933). J.F. Allan. De Ingenieur 48(30): A 252. P
Anonymous (1957). Dr. J.F. Allan. Nature 180(4576): 68-69.
Anonymous (1957). Dr. J.F. Allan. Engineering 183: 804-805.