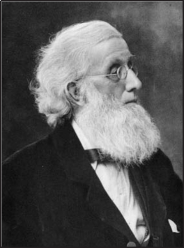 25.2.1829 Chatham/UK - 15.6.1915 Lewisham/UK
\
Nathaniel Barnaby, the grandfather of Kenneth C. (1887-1968) was apprenticed as a shipwright at the Sheerness Dockyard in 1843. In 1848, he was one of those selected to join the new Government School of Naval Construction at Portsmouth. In 1852, he became a draftsman in Woolwich Yard, and in 1854, he was appointed to oversee the construction of HMS Viper and Wrangler. Barnaby entered the design office of the Admiralty in 1855 and was engaged for the last of the wooden unprotected sailing line-ofbattle ships, which were never completed, however. Then, the Warrior, the first of the armored sea-going ships was built for the British Navy. The following thirty years were employed in the design and construction in wood, iron and steel of most of the ships designed for the British Navy.
\
In 1870, Barnaby was appointed the first Chief Naval Architect, and eventually Director of Naval Construction and Head of the Royal Corps of Naval Constructors. During this period, he was responsible for the design of sixty-six sea-going fighting ships of not less than 2,000 tons displacement. In a paper read at the Institution of Naval Architects in 1874, the advance of the Inflexible as compared with the most powerful of her predecessors was described. On its first voyage to Malta Sir Nathaniel accompanied her, and had sufficient confidence to remain upon the bridge over the canons when they were fired for the first time at sea. The introduction of steel in warship building in England must be credited to Barnaby, who advocated its use as early as 1875 with HMS Isis. Barnaby was one of the founders of the Institution of Naval Architects in 1860. He was a vice-president of this Institution and contributed many papers to its Transactions. He became a Knight Commander of the Companion of the Bath in 1885 and was a Member of the Danish Order of Dannebrog from 1875.
\
Anonymous (1915). Sir Nathaniel Barnaby KCB. The Marine Engineer and Naval Architect
37(7): 343-344. P
Anonymous (1915). Sir Nathaniel Barnaby KCB. Trans. Institution of Naval Architects 57: 214- 222, Frontispiece. P
Anonymous (1915). Sir Nathaniel Barnaby. The Engineer 119: 607. P
Barnaby, N. (1884). Shipbuilding. Encyclopædia Britannica ed. 9. Barnes & Noble: London. Barnaby, N. (1904). Naval development in the 19th century. Linscott: Toronto.
Watts, P., Rodger, N.A.M. (2004). Barnaby, Sir Nathaniel. Oxford dictionary of National biography 3: 949-950. University Press: Oxford.