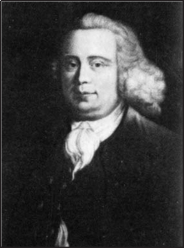 .. 1716 Thornsett/UK - 27.9.1772 Turnhurst/UK
\
James Brindley worked as a young man for mill construction. In 1752, his extraordinary qualities in mechanical works attracted attention, and he was asked for works in the harbor of Manchester. There, he became acquainted with the steam machine of Newcomen. In 1758, Brindley made works on the junction of Rivers Mersey and Trent and therefore set up a canal joining the Irish Sea with the North Atlantic across England. Later, he designed another canal from Manchester to the coal mines of Worsley for which a 12 m high bridge over the valley had to be incorporated in Barton. Another important canal project joined Manchester and Liverpool; the works were initiated in 1762 and concluded one year after Brindley had passed away.
\
From 1765, Brindley added particularly to the canal project from the Trent to the Mersey Rivers, later referred to the Grand Trunk Canal. The final project was approved in 1766, with a canal cross-sectional shape of a horseshoe. The entire canal of 150 km length had a total of 75 locks on both sides of the peak point in Harecastle. In addition five tunnels were made the longest of which was over 2,600 m long. Five other canal projects were initiated by Brindley, some of which were completed after his death. Brindley added in the 1770s also to the public works of Britain, such as for a bridge in London, or for dredging works in Liverpool. Together with John Smeaton (1724-1792), he introduced the civil engineering profession in England prior to France, where it only started after the French Revolution. Brindley was a man of fine character, whose achievements are remarkable in the light of his experiences of adversity and his debilitating illness. As a young man he was often ridiculed for his work and at the height of his career he was seriously affected by the diabetes which brought his life to an untimely end.
\
Brindley, J. (1771). A plan of the River Thames from Boulters Lock to Mortlake, surveyed by the order of the city of London. Jefferys: London.
Burton, A. (1972). The canal builders. David&Charles: London. P
Derry, T.K. (1975). James Brindley. Scienziati e tecnologi 1: 223-225. Mondadori: Milano. P Fairclough, K.R. (2004). Brindley James. Oxford dictionary of National Biography 7: 659-661. P Meynell, L. (1956). James Brindley, the pioneer of canals. Laurie: London.
Smiles, S. (1874). Lives of the engineers http://www.jannel.co.uk/bondend/ 1: Early engineering. Murray: London. http://www.jannel.co.uk/bondend/ http://wwwhttp://www.canals.btinternet.co.uk/canals/trentmersey.htm .jannel.co.uk/bondend/ http://www.canals.btinternet.co.uk/canals/trentmersey.htm