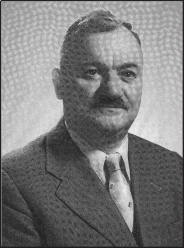 15.1.1900 Beograd/YU - 7.12.1982 Beograd/YU
\
Nikola M. Obradovič graduated from the Belgrade Technical University as a mechanical engineer in 1924. He went in 1929 for two years to Germany to complete his knowledge in fluid mechanics. Obradovič became in 1931 a Lecturer of hydraulic machinery at Belgrade University, and also taught there aerodynamics. In parallel, he collaborated with the national industry mainly in terms of Kaplan and Francis turbines, and with the pumping industry thereby also designing a hydraulic laboratory. During World War II, Obradovič was a prisoner in Germany but was released after a year. Upon returning to Belgrade, he was appointed professor of fluid machinery, but dismissed after the war because of the change in the regime.
\
During the post-war years, Yugoslavia developed its hydropower resources. Obradovič thus joined the Ministry of Energy as a consultant thereby designing hydropower plants in Ovčar Banja and Ðerdap. He rejoined the University of Belgrade in 1949 in the former position and a hydraulic laboratory was opened in 1955. During these years he presented additional books on fluid mechanics, turbocompressors and turbo machinery. In parallel, he acted again as an expert for the Ðerdap hydropower station for Serbia and Romania on Danube River thereby being decorated by the Romanian government. Following these successes, he also was instrumental in the setting up of the hydraulic laboratories at the Universities of Sarajevo, Niš and Novi Sad. Obradovič was from 1961 a Corresponding Member of the Serbian Academy of Sciences and was elected to Full Member in 1972. Having talked a number of languages, with excellent knowledge in technology and gifted with a warm character, a great personality passed away in 1982 who left a gap in the technical education of the country. His particular sense of humor and his authority made him among students to one of the popular professors of Belgrade University.
\
Gajić, A. (2007). Nikola Milan Obradovič. Personal communication. P
Obradovič, N.M. (1952). Fluid mechanics. Beograd (in Serbian).
Obradovič, N.M. (1953). La turbine ST-1950. Bulletin scientifique du Conseil de l'Académie de la Yougoslavie 1(2): 79-97.
Obradovič, N.M. (1962). Basics of turbo-machinery. Beograd (in Serbian). Obradovič, N.M. (1964). Turbo-compressors. Beograd (in Serbian).
Obradovič, N.M. (1974). Konstantin Voronets. Bulletin Académie Serbe des Sciences techniques, Beograd, Nouvelle Série 81: 229-231.