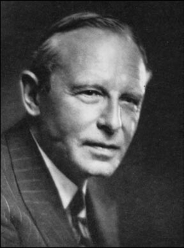 2.10.1883 Prague/CR - 25.10.1963 Winchester MA/USA
\
Karl Terzaghi graduated from the Graz Technical University as a mechanical engineer in 1906, after having also attended lectures in civil engineering and geology. He was then involved in the design of a hydropower plant in today's Croatia where both hydraulic and geological knowledge was required. In 1912 he submitted a PhD thesis to his Alma Mater and shortly later left Austria for the USA to visit dam projects. After returning, Terzaghi participated in World War I. Philipp Forchheimer (1852-1933) invited him then to Istanbul as a Lecturer at its university. Terzaghi published there his important 1923 paper and prepared the 1925 book. This work was the basis of Terzaghi's success that gave to a previously special science enormous impact.
\
In 1925, Terzaghi initiated lecturing at the Massachusetts Institute of Technology MIT. In 1929 he was appointed professor of hydraulic structures at Vienna Technical University. In the following years he was invited to the Soviet Union where large hydropower stations were designed. Terzaghi started lecturing in soil mechanics only in 1930, the year a laboratory for foundation technique was founded. Vienna gradually developed into a Mecca of soil scientists, as Göttingen for hydrodynamicists. In 1936, however, Terzaghi was attacked by one of his colleagues in Vienna. He left in 1938 first for France, and continued finally to the USA, where he was a Lecturer at Harvard University from 1940 besides being a consultant. From 1946 he was there a professor of soil mechanics. Terzaghi, the founder of modern soil mechanics, was richly awarded with Honorary Doctorates and Memberships of various scientific academic societies.
\
Casagrande, A. (1963). Karl Terzaghi. Géotechnique 14: 1-12. P
Ekwall, A. (1933). General Reporter Karl Terzaghi. Teknisk Tidskrift 63(9): 97-101. P
Fröhlich, O.K. (1963). Karl Terzaghi. Almanach Akademie Österreichische Akademie der Wissenschaften 113: 546-550. P
Terzaghi, K. (1923). Die Berechnung der Durchlässigkeitsziffer des Tones aus dem Verlauf der hydrodynamischen Spannungserscheinungen. Sitzungsbericht Österreichische Akademie der Wissenschaften, Math.-Naturwissenschaftliche Klasse 132: 125-138.
Terzaghi, K. (1925). Erdbaumechanik auf bodenphysikalischer Grundlage. Deutike: Wien. Terzaghi, K. (1929). The science of foundations - Its present and future. Trans. ASCE 93: 270-405.
Terzaghi, K. (1948). Foreword. Géotechnique 1: 1-4. P
Terzaghi, K. (1959). Theoretical soil mechanics. Chapman and Hall: London.