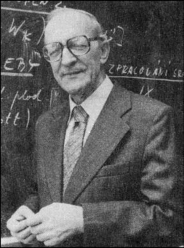 6.5.1914 Radlice/CR - 1.10.2002 Praha/CR
\
After graduating from the Czech Technical University in Prague CVUT in 1937, Ladislav Votruba joined as an assistant the Institute of Dam Engineering and Water Power Development of CVUT, then headed by Theodor Jezdik (1889-1967). After the closure of all Czech universities in 1939, Votruba took part in the design and construction of hydraulic structures, particularly of the pumped storage plant of Stéchovice. After World War II he returned to CVUT where he stayed until retirement eventually as a professor of dam engineering and successor of Jezdik.
\
Votruba was interested in all branches of dam engineering, particularly in the application of safety concepts, stochastic processes, winter regime and the use of novel material in dam engineering and construction. He also presented historical articles on the advance of dam engineering as an engineering science, such as his 1960 paper. In contrast to most of his colleagues, Votruba mastered also languages from Western Europe and therefore contributed to journals read by a wider audience. He was active in a number of water resources institutions and became eventually a vice-president of the International Committee of Large Dams ICOLD, certainly also to bridge the gap between the eastern and the western worlds. When retired, Votruba devoted attention to the history of science and technology and to the relationship between the water resources development and the environment.
\
Anonymous (1978). Prof. Dr. Ladislav Votruba. Water Power & Dam Construction 30(4): 7. Novak, P. (2004). Ladislav Votruba. Personal communication. P
Patera, A. (2002). Odesel prof. Ing. Dr. Ladislav Votruba, DrSc. Prazska Technika (5): 22-23. P
Votruba, L. (1959). Pier hydraulic power station in practice. Vodni Hospodarstvi 9(1): 2-9 (in Czech).
Votruba, L. (1960). Developments of Czech hydraulic engineering from 1945 to 1960. Vodni Hospodarstvi 10(6): 225-234 (in Czech).
Votruba, L., Patera, A. (1983). Thermal regime of rivers, reservoirs and hydraulic structures.
Academia: Prague (in Czech).
Votruba, L., Kos, Z. (1988). Analysis of water resources systems. Developments in Water Science 32. Elsevier: Amsterdam.
Votruba, L., Broza, V. (1989). Water management in reservoirs. Developments in Water Science
33. Elsevier: Amsterdam.
Votruba, L., Herman, J. (1993). Reliability of hydraulic structures. Brazda: Prague (in Czech).